The Gist: Poydras Street is named after Julian Poydras de Lalande, who was a poet, landowner, philanthropist, and a prominent statesman.

A portrait of Julian Poydras. Many sources have different spellings for his first name, such as “Julien” and “Julian.” State Library of Louisiana via Knowla.org

Poydras Street was one of the original streets in New Orleans’s first subdivision, the Faubourg Ste. Marie. Originally calling it “Ville Gravier,” Bertrand Gravier owned this area that was once the site of Bienville’s own plantation, and this area grew due to the American migration into New Orleans after the Louisiana Purchase. It was Julian Poydras de Lalande, however, who supposedly persuaded Gravier to undergo this development after the 1788 fire. He promised to buy multiple lots, one of which was at the intersection of (what is now) Tchoupitoulas and (what then became) Poydras Street [Chase 71-72]. Poydras was originally from France and owned a plantation in Pointe Coupee, northwest of New Orleans near the False River. A jack-of-all-trades of sorts, he dabbled in banking, poetry, and politics. It is argued that Louisiana literature actually begins with Julian Poydras. Germaine Beinvenu, while asserting that Louisiana literature should begin with the French explorers’ reports and journals, admits that “nevertheless, it is not until the appearance of Poydras’s poems in the Spanish colonial period that [scholars] detect the first works written for a literary purpose” [27]. Poydras also was influential in the political arena. He chaired the Louisiana Constitutional Convention in 1812, which was the only state convention that was conducted in French. He also started the Female Orphan Society in 1817, which cared for orphans and widows that were left destitute from the yellow fever epidemic.

Though built in the 1970s, One Shell Square still stands as the tallest building in New Orleans at 697 ft. It is not uncommon to see modern skyscrapers mixed in with historic buildings such as the one on the left.

Poydras Street is just as active and eclectic as the life of the man it is named after. It can be said that this street is the epicenter of the Central Business District of New Orleans. More colloquially referred to as the “CBD,” New Orleanians no longer know of this area as the Faubourg Ste. Marie. Poydras street begins near the Mississippi River near Harrah’s Casino, and ends (generally) at the Mercedes Benz Superdome. These two facilities are top revenue producers for the city. Overall, Poydras Street has become synonymous with business and professionalism for good reason because several skyscrapers house countless corporations, law firms, and other organizations. The Hale Boggs Federal Building and U.S. Courthouse is at the intersection of Camp Street and houses several government offices. The New Orleans Center closed down its shopping mall after Hurricane Katrina, and has since been cleared to make way for Champions Square, where the Who Dat Nation prepare themselves for Saints games. City Hall is also along Poydras at the intersection of Loyola Avenue, and it is a blemish on the urban landscape of the thoroughfare. Of course, I am referring to the old building itself. As far as what goes on inside City Hall…well, I leave that for you to decide.

Overall, the future of Poydras Street and the CBD looks rather bright. Businesses continue to thrive and relocate to this bustling commerce district. For example, the Recovery School District recently moved their headquarters into an office on Poydras Street in order to improve their overall operations. Although not on Poydras Street, the Poydras Home (at the Uptown intersection of Jefferson and Magazine) is undergoing expansion and renovation. Now operating as a retirement community, the Poydras Home was originally the Female Orphan Society that was established by Julian Poydras.

Countless people say “Poydras” everyday in conversation in New Orleans. While they mainly refer to the actual street and not the man, Poydras’s legacy lives on in the prosperity of the city nonetheless. 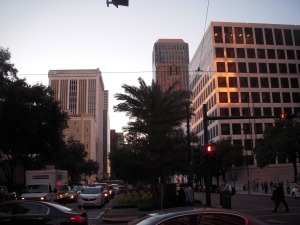 The Historic New Orleans Collection. “Between Colony and State: Louisiana in the Territorial Period.” http://www.hnoc.org/pdf/LA_territorial.pdf