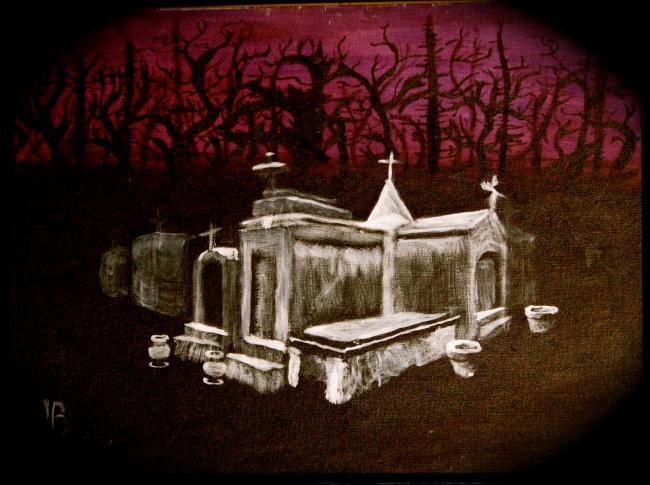 Getting into the Halloween spirit, I decided to change the blog this week. I initially thought to do a brief profile of each New Orleans cemetery, but that would have been quite an undertaking since there are over 14 historic cemeteries, each of which deserves more than one small paragraph. So, the obvious choice was to choose the St. Louis Cemetery #1, New Orleans’s oldest extant (or still-in-use) cemetery. Above is a painting I did for the Save Our Cemeteries art contest in 2000.

The above-ground tombs from St. Louis Cemetery #1 blend in well to the New Orleans skyline.

The cemetery’s site was designated by the Spanish Crown in 1789 in order to not only make room for more corpses but also to distance the citizens from potential disease outbreaks. At this time, (what is now) Basin Street was low swampland beyond the city limits.  The traditional “above-ground” tomb became popular because it helped maximize space (multiple people or whole families could be buried in one tomb). It also proved better than burying people underground since the mud was saturated, and the Mississippi River frequently flooded its natural banks. Now that modern technology can pump water from New Orleans, underground burials are possible; however, above-ground burials are a tradition. [Saveourcemeteries.org] 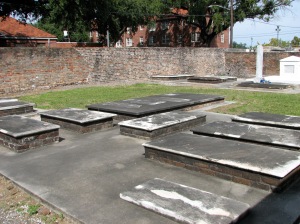 The flat tombs are a stark contrast to the above-ground tombs in the “Catholic” section.

A small Protestant section exists in the back of the cemetery, whereas most of the grounds are designated as Catholic burials. It is ironic that such hallowed ground would eventually be next door to Storyville, the infamous red-light district, which was closed down by the Navy during World War I out of fear that it might distract the sailors from their duty. It was later demolished in the 1930s. The Iberville housing projects are now adjacent to the cemetery in its place.

Just like today, a diverse population resided in New Orleans back then.

Here lies Bernard de Marigny. Custom has it that visitors leave dice on his tomb to commemorate his destructive love for playing craps.

Bernard de Marigny: The name should sound familiar to many New Orleanians since the trendy “Marigny” neighborhood was once his former plantation. He also founded the city of Mandeville and established a sugar plantation on the North Shore of Lake Pontchartrain where Fontainbleau State Park exists today. He was highly influential in the development of the city of New Orleans and the state of Louisiana. Also, he was a degenerate gambler who lost most of his lavish fortune. Supposedly, he introduced New Orleans to “craps.” Robert Florence says, “He ended up destitute and terribly in debt … and at 53 had to go to work as a clerk in the Office of Mortgages and Conveyances after having been not only a business tycoon but also a senator who helped frame the state constitution” [42].

Marie Laveau: The legendary Voodoo priestess is supposedly buried here. Ironically, Laveau was also a devoted Catholic and attended mass daily. It was her mixture of Catholic tradition and Voodoo practice (or “gris gris”) that made her so prominent.  She was born to a wealthy French planter, Charles Laveau, probably due to the “Code Noir” that decreed that a white man must marry a slave if they birthed a child together.  Laveau married two men in her life. Her last husband was Christopher Glapion, a captain in the Battle of New Orleans. His family still owns the tomb, and they do not approve of the droves of tourists that mark X’s on the tomb.  Florence says it’s more “vandalism” than “voodoo” to them. Although it is possibly the most popular tomb in St. Louis #1, it is not quite certain if her actual remains rest there. Florence says, “The date of death, 1897, is not hers, but closer to her daughter’s, Marie Laveau II. So the question is, which one of them is buried here?”

Here lies Homer Plessy. His plan to challenge a state segregation law backfired when the U.S. Supreme Court ruled against him in Plessy vs. Ferguson.

Homer Plessy: He was the Rosa Parks of his time, except it all blew up in his face (along with every other black person living in America at the end of the 19th Century). Plessy and the “Comite des Citoyens” challenged a Louisiana law that segregated passenger trains. Only 1/8 black, he was legally recognized as a “Negro” and was arrested after boarding the white car. Six years later, Plessy vs. Ferguson went before the U.S. Supreme Court, and the court ruled against Plessy, establishing the “separate-but-equal” doctrine for more than 6 decades. 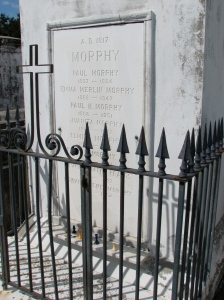 Paul Morphy: Morphy was the best chess player that the world had every seen. Oliver Wendell Holmes said that he was “a triumph of the American intellect.” As a child he was defeating Union generals and world champions. After easily defeating the best chess players around the globe, he decided to call it quits at the early age of 22.  During the Civil War, he and his family evaded the Union occupation of New Orleans by fleeing to Paris, where he would slowly go insane.

The elaborate Italian Society tomb was made popular when the movie Easy Rider featured it during the acid trip scene. As a result, filming was banned at the cemetery for many years.

There are several “benevolent society” tombs in the cemetery. Such societies were formed to support immigrants. There are society tombs from cultures such as Portugal, Spain, France, China, and Italy.

Overall, the St. Louis #1 is quite pleasant and intriguing within the confines of its walls. What is a little creepy, however, is how many graves no longer remain in the cemetery. The iconic “Varney” tomb, with its pyramid shape and ball top, greets visitors at the main entrance, yet it once was the half-way point of the cemetery. So, you can assume that you might be walking over corpses when you cross Basin Street and its neutral ground. Actually, many cemeteries are smaller than their original sites (such as Greenwood Cemetery along Canal Boulevard). In fact, St. Peter Street in the French Quarter was one of the original cemeteries of the city. With the development of condos and hotels, construction workers have unearthed skeletons as late as 2011.

This memorial honors the fallen veterans of the Battle of New Orleans. There is also a society tomb in the Catholic section for veterans of this war.

Each cemetery in New Orleans tells countless stories, including the expansion of the city. Typically, cemeteries marked the outskirts of the current development. Florence says, “To track the growth of the New Orleans, one must start at the river. The story of New Orleans burial begins here as well, on the natural levee.”

Only in New Orleans where “death” can be synonymous with “growth.”  Happy Halloween!

Old tombs easily fall into disrepair or neglect. Organizations, like Save Our Cemeteries, do a great civic duty to the city in helping restore and preserve historic tombs.

City of the Dead: A Journey Through St. Louis Cemetery #1. Robert Florence. 1928.