The Gist: St. Charles Avenue was named after King Charles III of Spain, who was in power when Spain acquired New Orleans in 1763. It’s not necessarily named after a saint, but the Spanish monarch.

Yesterday: St. Charles Avenue has become one of the most iconic avenues in New Orleans, yet it was nothing more than a swampy frontier in 1822. John Chase writes, “St. Charles street was best known to the boys, who sought in sport for snipe among the latanier in the marshes, which had never been disturbed otherwise in their original growth” (122). He says that eventually St. Charles Avenue would be become the American Sector’s “lifeline.” 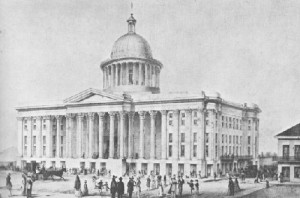 The original St. Charles Hotel built two blocks from Canal Street in 1837. Designed by famous architect James Gallier, it was one of the first great American hotels in the country. In 1851, it burned down in one of the city’s great fires. It was rebuilt without its iconic dome, yet would burn down again in 1894.

It seems that St. Charles Avenue was always bustling with activity and prosperity even since its conception. Drinking was big then as it is today. Chase says that a library owner installed a bar among the bookshelves so that his library could survive. And, it most certainly did after that. Chase says that the avenue “was a gay, bright, and lively street with an air of exciting bohemianism about it” (212).

A railroad connected New Orleans and the town of Carrollton (the former Jefferson Parish seat and now the Riverbend area of Uptown New Orleans), prompting growth along the route. This is how St. Charles Avenue grew across what was once a row of plantations. This railway is still in use today as the St. Charles streetcar line, which is oldest working railway in the world.

A streetcar rolls passed The Holy Name of Jesus Church on Loyola University’s campus. Tulane University is adjacent to the church, and the beautiful Audubon Park is across the street.

Today: Just as it was the major avenue for the American sector of the Faubourg Ste. Marie (now the CBD), it remains the primary Uptown route with homes, restaurants and bars, shops, universities, parks, and businesses. On this street, one can really see the diversity of New Orleans. You will see lawyers and businessmen wearing suits alongside service industry workers in chef shirts or serving aprons. People of all races, economic classes, and backgrounds can be seen along St. Charles Avenue. 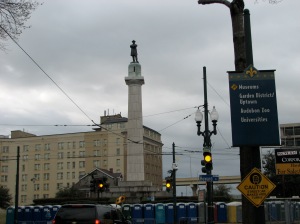 St. Charles Avenue at Lee Circle. Named after Confederate General Robert E. Lee, Lee Circle remains a popular destination to catch parades. Notice the row of port-o-lets at the bottom of the picture.

From Canal Street to Calliope Street (near the Pontchartrain Expressway Overpass), the avenue is full of law firms, skyscrapers, hotels, banks, fine restaurants, and town parks (like Lafayette Square). It then curves all the way to the river, intersecting with Carrollton Avenue in the Riverbend section of Uptown. It passes Tulane and Loyola universities, Audubon Park, and countless bars and restaurants.

The St. Charles streetcar line is still a major mode of transportation for locals and tourists alike. On a nice Spring afternoon, the streetcars will be at capacity with riders enjoying the views of century-old live oaks and elegant homes (some Antebellum). Most American cities refer to these transportation cars as “trollies;” however, we call them “streetcars.” The green streetcar along the St. Charles route has become an iconic symbol of New Orleans. Children commonly have birthday parties aboard them.

Since carnival season is in full swing, it is also good to mention that St. Charles Avenue has become a standard route for most Mardi Gras parades due to its wide neutral ground (or median) that can accommodate large crowds. Though several krewes parade down St. Charles Avenue two weeks before Mardi Gras, the most popular parades lead up to Fat Tuesday. On Thursday night, Muses (a krewe exclusive to women) rolls. Bacchus (one of the few “super krewes”) rolls the Sunday before Mardi Gras and features a famous celebrity as the Grand Marshal each year. Orpheus runs on “Lundi Gras” (or the Monday before Mardi Gras), while the Zulu and Rex parades roll on Fat Tuesday. During carnival season, beads get caught in tree branches and power lines and decorate the avenue until the next carnival. 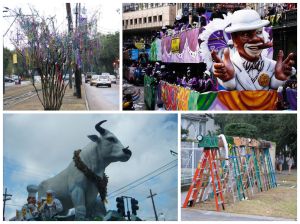 Clockwise from top left: Mardi Gras beads hanging year round in trees along parade routes; the Bigshot float in the Zulu Parade; seated ladders are a common site along St. Charles during Mardi Gras; the Boeuf Gras float in the Rex parade. Credit for Boeuf Gras and Zulu pictures: Chris Graythen, Getty Images.

Zulu is a historic African-American parade that runs on the early morning of Fat Tuesday. This krewe was not allowed to parade publicly until 1968. Run by the Social Aid and Pleasure Club, Zulu has both white and black riders that dress in grass skirts and have black face. This event is most likely the only occasion in America (if not the world) when white and black people wear blackface together and it be not only tolerated, but celebrated. As I’ve said before, we do things a little differently down here.

The Krewe of Rex is also a historic parade that first took to the streets in 1872. It brought stability to the carnival season at a time when the city considered eliminating carnival due to chaos and disorder, and they continue to do things for the public good (as their motto “Pro Bono Publico” suggests). Rex’s iconic Boeuf Gras float symbolizes the medieval routes of carnival. Historically, many European (typically French) cultures used to parade cattle down the streets and into the slaughterhouse for one last feast before fasting for Lent. In fact, Rex paraded live cattle in the parade for many years as well. Dr. Stephen Hales from the Rex Organizations says, “The Boeuf Gras is the oldest symbol of carnival, going back to the Middle Ages. In fact, back then they called it Boeuf Gras, not even Mardi Gras. If you took a 14th-century Frenchmen and parachuted him into New Orleans during Mardi Gras, he would be baffled as to what was happening, until he saw the Boeuf Gras float. Then, he would know exactly what was being celebrated.”

Tomorrow: St. Charles Avenue can appear as a time capsule with the streetcars, century-old mansions, and oak trees; however, new developments are always transforming the grand street. According to http://www.nola.curbed.com, a new grocery is being planned at 2025 St. Charles Avenue and will supposedly have a “beer cave,” coffee station, and a walk-in cigar humidor. These are a few of my favorite things, it just so happens.

As far the future of St. Charles Avenue goes, I do not foresee any significant changes, and I think mostly every New Orleanian is 100% content with that as well.