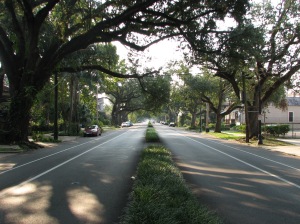 The neutral ground is much larger starting at the river, but it becomes a narrow strip of monkey grass at N. Miro Street near the Gayarre Place statue.

The Gist:  Esplanade Avenue gets its name from a Spanish military esplanade that ran from Fort St. Charles (where the U.S. Mint building is today) to Fort St. John (which used to be at the intersection of Barracks and Rampart).

Yesterday: Like most things New Orleans, it’s not a simple story. As most American stories begin, it starts with the Native Americans. What we know now as the “Esplanade Ridge” is a naturally high ground that the Indians used for portage between the Mississippi River and Lake Pontchartrain via Bayou St. John. Once John Law’s Company of the West planned the layout of New Orleans, this area was mandated that it be left undeveloped to allow for common defense of the new town. During the French colonial period, this area became later known as the “City Commons,” which was a plantation that was commonly owned and operated by five different owners. So, it did not go over well with the landowners when the Spanish came to power and decreed that the land be used directly for defense and built Fort St. Charles at the river and Fort St. John at (what is today) the intersection of Barracks and Rampart. They sued the Spanish King to no avail. By 1803, when the Louisiana Purchase commenced, the Spanish fortifications had fallen into disrepair. Since the area originally belonged to the French, the U.S. reasoned that the land was now theirs. Fort St. Charles had some influence leading up to the Battle of New Orleans, but the city did away with it by 1821.  The U.S. Congress than decreed that the old “City Commons” be divided up into new subdivisions to allow for expansion. The descendants of the “Creole” people of New Orleans expanded out from the French Quarter, since the American Sector was beyond Canal Street. It later became an avenue of great architecture and wealth, very similar to the American St. Charles Avenue. Several Catholic schools, such as St. Aloysius (which later merged with Cor Jesu to form Brother Martin in Gentilly), were established along the “Promenade Publique” as it was commonly called.

Of course, the story doesn’t end there. The U.S. Mint building would then take the place of Fort St. Charles; therefore, the city would give that building to the federal government. Ironically, Major P.G.T. Beauregard, who would later side with the Confederacy and command the forces at Fort Sumter, suggested extensive repairs be made to both stabilize and “fire proof” the building (Christovich 15). Once the Civil War broke, the city then seized the mint back from the federal government. Once General Farragut captured New Orleans, General Ben Butler occupied it, and the union seized the mint back from the city. As time went on, Esplanade Avenue would soon have a rail-line connecting the river to Bayou St. John, so residents could travel to the “pleasure gardens […] on sites of early plantations at the bayou” (Christovich xix). The elegance and atmosphere of this street would attract several artists including French Impressionist Edgar Degas.

Esplanade splits left and Bayou Road splits right just after N. Miro Street. Gayarre’ Place was once near an old Indian Market. Several other triangular parks are along Esplanade Avenue as a result of centuries of boundary line disputes.

Today: Esplanade Avenue runs from the Mississippi River and ends at Bayou St. John. It borders unique neighborhoods such as the Vieux Carre, the Fauborg Marigny, and the Treme. It has something for everyone. Lavish homes, museums, quaint B & Bs, music venues, horse races, festivals, dive bars, coffee shops, green space, cemeteries, and dining establishments. The U.S. Mint building is now a Louisiana State Museum and its grounds host several musical festivals such as Satchmo Summer Fest and the Cajun-Zydeco Music Festival. Esplanade is the entrance to the booming music scene on Frenchmen Street in the Marigny. Every spring, the Crescent City Classic route follows most of Esplanade into City Park, and over 20,000 runners gaze at its unique features as they run by. The Degas House is a B & B that has been restored to honor the artist’s and the neighborhood’s history. Just a few blocks off the main street, the historic Fair Grounds Race Course run horses from Thanksgiving to March and host the immensely popular New Orleans Jazz and Heritage Festival that kicks off the last weekend in April and ends the first weekend in May.

Esplanade crosses Bayou St. John and ends at a small traffic circle on Wisner Boulevard, which soon turns into North Carrollton (going towards the river). The circle revolves around a statue of General P.G.T. Beauregard who once lived on the avenue and would later promote the Louisiana Lottery. Where the attractive gardens once were beyond the bayou, City Park gives residents the opportunity to have picnics, play sports, and bicycle among many other activities. The New Orleans Museum of Art is one of the grand views from the foot of Esplanade Avenue. Although a rail line no longer runs the length of the avenue, the City Park line (a part of the Canal Streetcar line) ends at the park, so residents can still access Esplanade and the bayou. 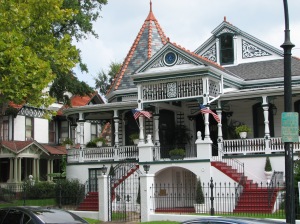 Tomorrow: Also, like most things New Orleans, the story isn’t over. In the book, New Orleans Architecture: The Esplanade Ridge, Christovich writes that Esplanade Avenue “is beautiful, it is grand, it is shabby and often frayed; it is struggling for new definition and survival” (xx). The eclectic avenue is all of those things and continuing to redefine itself. Paths to Progress, an intergovernmental partnership, is resurfacing many streets throughout New Orleans. The construction has ended on Esplanade, making the portion between the bayou and Claiborne Avenue one lane traffic to allow more parking area and a bike lane. Wheelchair curbs were also installed. Some residents have complained about the inconvenience of the construction and remain skeptical of the new development. Many believe that the one lane traffic will cause gridlock traffic, especially during Jazz Fest. That remains to be seen, of course, next year. The American Heritage Dictionary defines “esplanade” as being “a flat, open stretch of pavement or grass used as a promenade.” And, just as it originally began as a public space, New Orleanians still can enjoy Esplanade Avenue via foot, bike, or automobile.